ALBANY — State House District 152 Rep. Ed Rynders, R-Leesburg, will announce later today that he is resigning from his seat in the House after moving to St. Simons Island.

He is Chair of the Governmental Affairs Committee. This committee determines if Greenhaven moves ahead. The policy’s he has endorsed in the past have not been good for DeKalb County or Metro Atlanta. 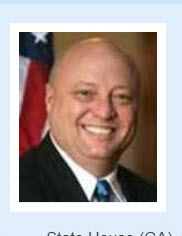 A 17-year House veteran, Rynders revealed to The Albany Herald that he has health concerns that are part of a “perfect storm” of issues that led him to make the decision to step down from his seat in the House with a year left on his current two-year term.

“My wife, Jane, and I had already been talking about what we would do when we retire, and two of the places we talked about were the Georgia Coast and Athens,” Rynders said during a lengthy Thursday-morning conversation. “The local (Lee County) school system also made some personnel changes that would have made my daughter (Megan Ealam) one of my wife’s supervisors (at Twin Oaks Elementary School), which had the possibility of being awkward.

We wish him good health, but he did everything he could to hurt other parts of Georgia. He is mean and vindictive. He treated his fellow Georgians in Metro Atlanta with disdain and many times outwardly disgust. As Chair of the Governmental Affairs Committee he ran it like his own little fiefdom. He would change times of meeting or locations at the last minute even when hardworking citizens had taken time off of work to speak in front of the committee. He has spoken on the record that he didn’t care the Greenhaven and Vista Grove bills were good for DeKalb or not as long as it was presented within the rules.
Glad he’s gone, but wish him well. Goodbye and Good Riddance

As chairman of the House’s Governmental Affairs Committee and secretary of the Appropriations and Health and Human Services committees, Rynders became something of an anomaly in the House. He became one of the few rural — and even fewer southwest Georgia — representatives to wield a considerable level of power in the Legislature. He also served on the House Transportation Committee, was chairman of the One Georgia Overview Committee, was an ex officio member of the Ways and Means Committee, and served on the Rural Economic Development, Redistricting, and House Republican Politics committee

Rynders said he’s looking, health permitting, at doing consulting work in areas such as education, health care, rural economic development, local government and the not-for-profit sector after stepping down from his House seat.

When Rynders sends a resignation letter he has written to Gov. Brian Kemp, Kemp will set a date for a special election to complete the year left on Rynders’ current term.

“I don’t want anyone to ever question my loyalty to southwest Georgia,” the resigning representative said. “Southwest Georgia has been my home all my life, and although we have our problems, we can’t give up hope.”

Proposed Greenhaven, Ga How It All Began